History of the Society

The Poetry Society of Cheltenham is said to have been founded originally in 1855 by Alfred Lord Tennyson, who used to stay in St James's Square when he came to Cheltenham, at a house which is now the presbytery of St.Gregory's Church. Among early visitors to the Society was Robert Browning.  The Society flourished in the nineteenth century, but foundered at the outbreak of the First World War. It was restarted in 1925, but ceased again in 1939.

The present Society was established in January 1967 by Wilfrid Appleby who, when young, had met Tennyson. Appleby remained Chairman until 1976. Among those who attended the present Society in its early years were Cecil Day Lewis, Laurie Lee and Leonard Clark.  Records are sparse, but we do know that that Poet Laureate Cecil Day-Lewis was President in 1971, followed by Poet Laureate John Betjeman until 1984. After that, Stephen Pettit was President, until his death in 2002.

Desmond Badham-Thornhill was Chairman for many years - from 1976 to 1990. He was followed by Michael Henry, for two years, followed by Michael Newman (currently a Committee Member) for nine. For many years the Society met in a Regency house overlooking Pittville Lawn, which was the home of Enid Barraclough.
By the late 1990's numbers had begun to dwindle and the Society nearly came to an end. However, in December 2001, the Society merged with a group called the New Poetry Workshop.

The New Poetry Workshop had been started informally in 1986 when a new member of the Poetry Society suggested that a writing group could be formed. The NPW met for about a year in Brockworth, gradually picking up new writers. Sheena Henderson was the first Chairman, followed by Brian Holley. It met first of all at Parmoor House in Lypiatt Terrace, later moved to the Japanese School in Pittville, and then back to Parmoor House in the early 1990's.

In spite of its name, the NPW was never a true workshop, but a forum or circle which provided in-depth and informed criticism of members' poems. The approach used was the Hobsbawm Method - so successful, and now well established in universities and elsewhere - that it is still practised by the Society today.  At various times the group gave readings to local societies and institutes, and took part in festivals and concerts. Some members were published poets with slim volumes to their credit, some had been published in well-known poetry magazines, some had won competitions, some were newer to poetry, but all appreciated the honest and good-humoured criticism and comment given and received at meetings.

The merger of NPW and the Society resulted in the Poetry Society of Cheltenham, and for a while it existed solely as a writer's group. Pamela Cox became Chairman in 2001, after the merger with the NPW, followed by Roger Turner.  Under Roger's leadership, a new monthly workshop - including a writing exercise and constructive commenting - was introduced within the Society's programme, alongside the existing Writing Group and Poetry Reading Group. 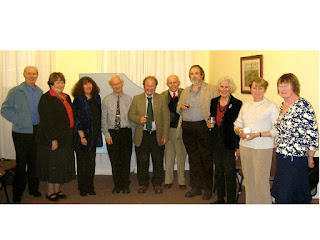 Sharon Larkin, took over from Roger in January 2012, focused on encouraging new and less experienced poets, keeping the membership updated on contemporary poets/poetry, introducing the annual retreat, overseeing the publication of two anthologies, increasing the number of readings and collaborations with poetry groups from other towns and exploiting the internet for social networking. In 2016 Roger returned to the Chair, with Sharon moving to the newly-created role of Secretary to the Society.