Beyond the Well-Mapped Provinces

Here is an approximation of what the cover of our new anthology will look like (actually the font and text positions will be a little different from what you see here).  The proof copy has been received and the final order will be placed shortly, ensuring delivery well in time for our launch event: 6-7 pm, Wednesday 24 April, 6-7 pm, Cafe Rouge, Promenade, Cheltenham. 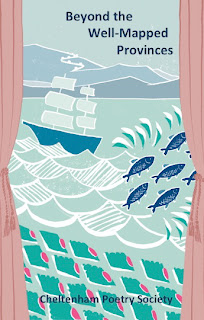 Posted by Cheltenham Poetry Society at 07:07 No comments:

Nigel McLoughlin, Professor of Creativity and Poetics at the University of Gloucestershire, delivers this year’s Annual Lecture for Cheltenham Poetry Society. The lecture will explore the use of metaphor in poetry and will be of interest to readers and writers of poetry at all levels of experience. Nigel is a prize-winning poet with five collections published. He is the editor of Iota.
Posted by Cheltenham Poetry Society at 17:18 No comments:

Beyond the Well-Mapped Provinces

We are excited at the approaching publication of Cheltenham Poetry Society's anthology "Beyond the Well-Mapped Provinces".

Cover art (below) has been designed by Abi Ponton of Pigeon Illustration. http://pigeonillustration.com 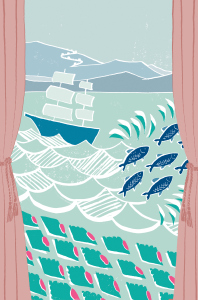 Posted by Cheltenham Poetry Society at 17:50 No comments:

This week has included three evenings in succession filled with poetry!

On Tuesday 5 March, we held our monthly workshop.  In this session we looked at some examples of concrete poetry - where the use of "white space" around the "black space" (ink or print) is important in conveying meaning and often, where the shape of the text on the page relates to the meaning of the  poem.   After the refreshment break, we used word hoards - lists of words to inspire us to draft our own poems.  As usual, we read these back to the group, giving and receiving constructive comments to help us in the editing of these early drafts. 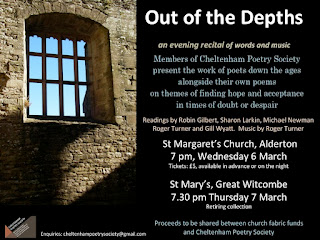 The next evening, 6 March, saw the first of our two recitals entitled "Out of the Depths" and drawing inspiration from Psalm 130.  During this event, at St Margaret's Church, Alderton, Five poets from the Society (Roger Turner, Michael Newman, Gill Wyatt, Robin Gilbert and Sharon Larkin) read poetry from the past five centuries on themes of searching for meaning, faith and hope in times of questioning, doubt and despair.  This was followed by a musical interlude, with a metrical version of the 130rd Psalm and settings of two poems by George Herbert to music, composed and played by Roger Turner - and beautifully sung by Nia Chittenden.

Here is a recording made on the night: Out of the Depths, Alderton

The gracious hosts at St Margaret's supplied a wonderful array of food, wine and juice for the interval - much appreciated by performers and audience.  In the second half, the poets read their own poems on similar themes - searching for significance and hope.

On Thursday 7 March we repeated the recital at St Mary's, Great Witcombe, where we were delighted to be greeted by another attentive audience, and welcome refreshments in the interval.

"Out of the Depths" was first performed at Highbury Congregational Church in April 2012, during Cheltenham Poetry Festival.  The Society welcomes enquiries from other venues where this kind of event would be suitable.
Posted by Cheltenham Poetry Society at 03:58 No comments:

Great to see poems by Roger Turner ("Three Pylons") and Robin Gilbert ("Memorials in Cheltenham College Chapel") alongside my article on "Why Poetry Matters" (retitled as "Poetry: Obsolete or Important? You Decide" in the current edition of Cheltenham Arts Council Perspectives.

Congratulations to Katherine Macinnes on the publication of this newsletter in its new attractive colour magazine format.


Posted by Cheltenham Poetry Society at 03:38 No comments:

Come and join us at our regular monthly Poetry Writing Workshops.  The next one is on Wednesday, 5 March, at our normal venue, the Rosalind Room, upstairs at Parmoor House, 13 Lypiatt Terrace (parallel with Lypiatt Road), Cheltenham, GL50 2SX

The workshop will follow our usual format - a writing exercise followed by a read-round of what we have written (no obligation!), a refreshment break with coffee/tea/biscuits, reading poems brought to the workshop - an opportunity to give and receive constructive, helpful comments to assist poets in self-editing their work.  Please bring writing materials and about eight copies of two of your poems.

These workshops are informative, stimulating and good fun ... and excellent value at just £4. This is reduced to just £2 per session if you subscribe for a year (annual subscription £8) - a substantial saving if you attend on a regularly basis.

Workshop leaders alternate between members of the Writing Group.  On 5 March I will be leading the writing exercise and look forward to seeing regulars and newcomers for what is designed to be a helpful and stimulating evening.

Sharon Larkin
Posted by Cheltenham Poetry Society at 02:39 No comments: